Why Having Conviction Makes for a Great Leader 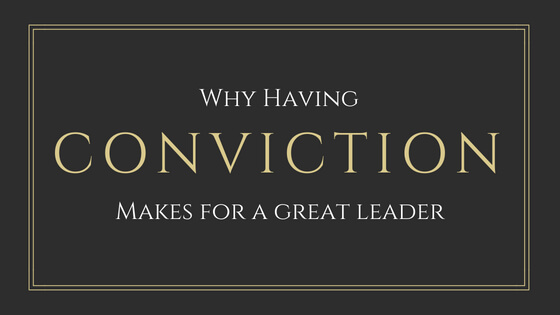 A great leader is one that knows exactly what their next step is. Whether it be at work, in their personal life, or goals that are being reached as a collective effort in a society, having conviction makes for a leader that many people want to follow. Some of the best leaders that ever lived, like Martin Luther King Jr, Abraham Lincoln, and Gandhi, knew their exact purpose of the position that they were in. They used traits such as strength, emotional intelligence, and refrained from questioning their motives to project themselves into the spaces that they wanted to occupy in life not only for themselves but for others that had the same goals as them.

Strength develops from going through situations that were unexpected and successfully persisting. A leader that leads from a position of strength focuses not on the negatives that are happening, but a way through the obstacles. As a leader, there must be conviction behind the things that you are trying to achieve. Operating from a power of strength is one way to prove that you are worthy to be followed.

Positivity is also something that ties in with conviction and leadership. As a leader, you can not talk down on your own cause; if you do, those who follow you will begin to waver also. You must keep a leveled head and spread the positive messages that you are trying to convey. Like both Dr. King and Gandhi, they both used positivity to achieve overall success.

Emotional intelligence may be an unexpected trait great leader possesses. Being able to understand your fears as a leader and containing them will greatly affect how you are able to lead. Having the awareness that unplanned situations may arise during your journey, but being able to appropriately adjust to them without bringing fear and uncertainty to those who are following behind you is a sign of impressive leadership.

The willingness to do whatever it takes is one of the most substantial traits of a leader. As a leader, people are looking up to you and watching for your next step. You can not back down from things that scare you, you must learn to rewrite your plans if something does change. Doing whatever it takes to achieve the greatest possible outcome for each situation is what leading is all about.

Those that have these traits will develop into the leaders that they aspire to become.  With that, they will be able to create a better environment for both themselves and those around them.